above: the vision of an opened-up floor plan between the 30s original house and 60s addition taking form in June, 2015

Earning our reputation as dream-distillers, Claret-Cup was tasked with the complete remodel of a 2000 sf single-family home in Burbank on a shoestring budget for an adventurous, young couple with a vision for a modern home filled with light and air.

The original house, built in 1938, was added onto multiple times over the decades, resulting in a labyrinthine arrangement of rooms, corridors, a contorted stair and doors revealing a retailer’s palette of wallpapers, wood and plastic wall paneling and floor finishes.

Even at its worst, however, the house felt bright inside and it was clear that a few well-placed “moves” could transform the interior completely and make use of the generous back yard for additional entertaining space.

The chosen design relocated the kitchen – originally “landlocked” between two smaller rooms – to the 1950s extension of the house with direct access to the garden and a new ground-floor deck. The new, single-shot staircase adds drama, storage-space and allows for opening up the floor plan between the more public areas of the house. The second story master suite was completely reoriented to favor the views, allow for a walk-in closet and a luxurious bathroom that has a tub with a view.

In addition, Claret-Cup was able to accommodate an extra bedroom, full bath and enlarged kitchen desired by the clients, all within the original footprint of the house. 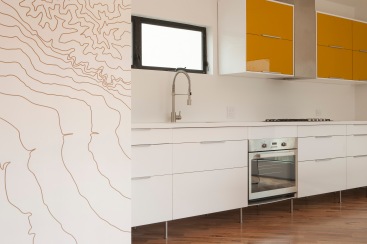 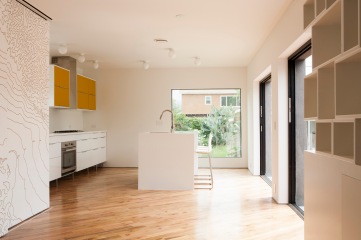