This small and intensely personal project for a young artist couple in Los Angeles can be best described as a design-dance with four characters. Forget neat divisions of labor or a disinterested party that takes the back seat during design. Replace the image of architect presentations with work sessions at the Fix in Echo Park, on neutral ground with all four people present, pencils sharpened. Imagine the bones of the house rising from the ground around the avocado tree and the satisfaction of living in a house mostly handmade by yourself.

1. FROM DREAM TO SCHEME

Early February, 2011 – On our way to a meeting with friends of a friend, who are thinking of building a house in Frogtown. They wait for us with a foam-core model of an early idea in the middle of their breakfast table. We spend a few hours sketching ideas, each of us layering blue, gray, red pencil marks on yellow trace. They want to collaborate. A few really good cappuccinos later we know this project is for real.

Clients’ dreams: 800sf new structure, keep existing buildings on site, separate house and art studio, room for guests, gardens corresponding to different times of the day. One of them sees themselves moving through a series of pavilions animated by the day’s activities, punctuating a landscape, the other sees the making, hanging, loading and unloading of art in a high-ceilinged workspace.

Mid-February, 2011 – Confronted with the facts of the site: 40’x120’ lot, R2 zone, setbacks, parking requirements, a 700sf existing house in the back (needs a lot of help), shoebox garage and a massive avocado tree 25’ from the front lot line.

The task is to fit the new 800sf structure between the existing buildings and the avocado tree within setbacks. One way or another, there will be two practically separate buildings on this lot: a house and a studio. Their precise arrangement and ability to be individual units or not comes down to the parking requirements of the building code. The semantics of their identification as house, addition, accessory building  or something else have far-reaching consequences on their final geometry, possible uses, cost of improvement and the entire feasibility of the project. 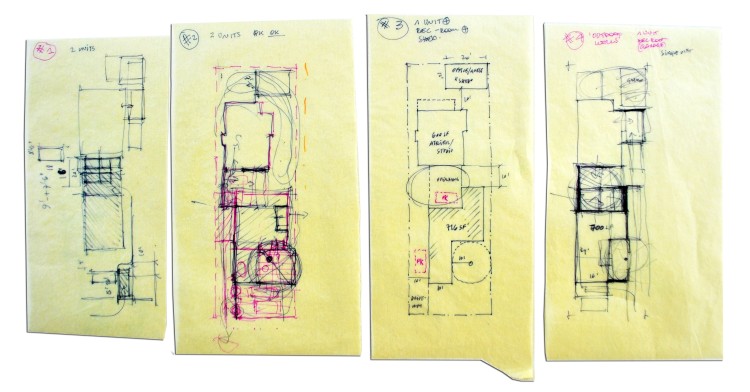 In the end, the new house, though structurally separate, is billed as an addition to the existing building. A perfunctory roof-connector allows us relief from the required 10’ separation between buildings, which would have eaten away at the square footage of the new building. We pick our battles and leave the roof of the existing building alone to avoid the cost of upgrading it to current code. It becomes the artist studio with minimal upgrades and a modest ceiling height. For the success of the project, you sometimes have to know which shred of the dream to give up on.

2. FROM PENCIL TO STAMP

March 2011 – The new house needs to be designed around details, salvaged windows and doors, a coffee/cigarette/bathtub moment, a couple of key appliances and plumbing fixtures and slate on the roof. We, as architects, need some concepts to string everything together.

The narrative becomes the iconic cottage with its steeply pitched roof, sheared along its long axis and telescoping at both ends. Unlike the sides, which are punctuated by slender windows, the exposed ends have full-height (14’ tall) openings, as if exposing a building section, Gordon Matta-Clark-style.  The exposed ends open up the building to the Morning Garden and Courtyard, respectively, expanding the interior space. The split facades are designed to imply their corresponding parts through window arrangement, material texture and ornament.

The split concept is carried through the detailing of the structure, openings, circulation and exterior materials of the house and the construction documents are produced for the building department submittal in late April 2001.

Mid-June, 2011: Permits are received for construction.

3. FROM DIRT TO PLYWOOD

The ink from the stamp barely has time to dry before demolition and excavation begins for the foundation. Site visit after site visit, we see the client covered in dust, supervising the work, loading and cutting lumber, wielding power tools, haggling with inspectors.

Pouring the footings and the slab, setting the hardware and connecting the structural elements are the bones of the house that are crucial for the success of what comes next: all the rest. The geometry is rendered in monolithic plywood, everything is clear and simple still, the concept is legible.

END OF AUGUST, 2011: clients move in to the studio, which now has new utility oak flooring, new drywall interior, a shower and basic amenities for life at the outpost. The new house, having passed its final framing inspection, will be worked on incrementally by the client and the occasional subcontractor.

4. FROM SHINGLE TO ESPRESSO

We could say that the collaboration ends at the end of our physical involvement with the project. However, what unfolds from here on in the development and realization of very specific personal spaces by the client that were part of the project from the very beginning.

What we call the “tub moment” takes shape in specific materials and fixtures of the clients’ choice, the large glass doors to the Morning Garden allowing it to be animated by the eastern sunlight.

The Courtyard and its furnishings complete the house to such an extent that it is almost impossible to imagine the spaces with the doors closed. The house pushes you outside. Two large doors fabricated by the client for the two facades opening to the garden reinforce the different attitudes the “slid” vs. the “sliced” facade have with the Courtyard, even though the detailing is different from what was originally planned.

The anamorphosis of the front façade is played up by the whimsical detailing of the cornice and windows, also handmade and conceived by the clients, and can be experienced from the street as one passes by in front of the house.